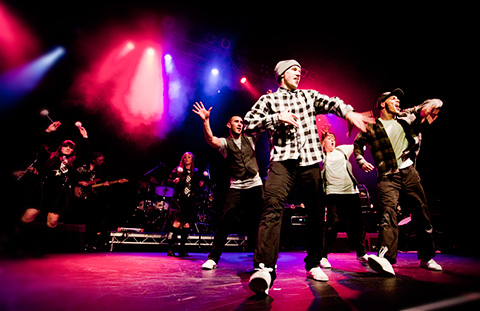 MOVE was built on a programme of workshops created by Wild Biscuit in Mid Argyll, beginning in 2010 and going on to be performed live on stage at Celtic Connections Festival in 2011 and 2012, with appearances at the MG Alba Trad Music Awards (Perth Royal Concert Hall 2011), VisitScotland Expo (the Royal Highlands Centre, Edinburgh, 2012) and Blas Festival, Inverness.  At Celtic Connections Festival, Glasgow’s iconic 02 ABC in Sauchiehall Street was the perfect venue for MOVE, a venue sadly lost in the Glasgow School of Art fire of 2018, but always in our hearts,

A cornerstone of MOVE was the inclusion of original tunes by members of the cast, and some of these are now available on EP from the link on our home page. Composition was a significant element of the workshop programme, especially in master classes with two of Scotland’s finest pipers Fred Morrison and Finlay MacDonald, Head of Piping Studies at the National Piping Centre.

In 2011 MOVE was the recipient of Creative Scotland investment under the Quality Arts Production programme. Wild Biscuit is also grateful to Skilt for their generous product sponsorship (check out the Skilts in the video) and also to Scott Currie Percussion.